Stone Temple Pilots back together again! I always knew this would eventually happen.. no matter what people said.. but still that didn’t stop me from seeing Velvet Revolver 4 times on the last tour (& a few times before that).. tons of fun!  Just very different.. and regardless of all the friends we made along the way and the parties or V.I.P.  areas we were invited to.. the elusive Scott Weiland was not often to be seen.. like a phantom in the night..

That’s me and Rosie looking fabulous up above.. and that’s me and my buddy Matt… me and Matt have been online friends for years and years.. we are both web gurus and both love STP.. Matt is super cool and got us invited to this special meet and greet he was running with the band.. So finally now’s my chance to meet Scott again after 4 long years.. I get to be my lovely charming self… and of course win him over.. the last time we met, his wife wouldn’t let go of his hand.. and I just smiled pretty.. anyway this is exciting, let’s go! 😉 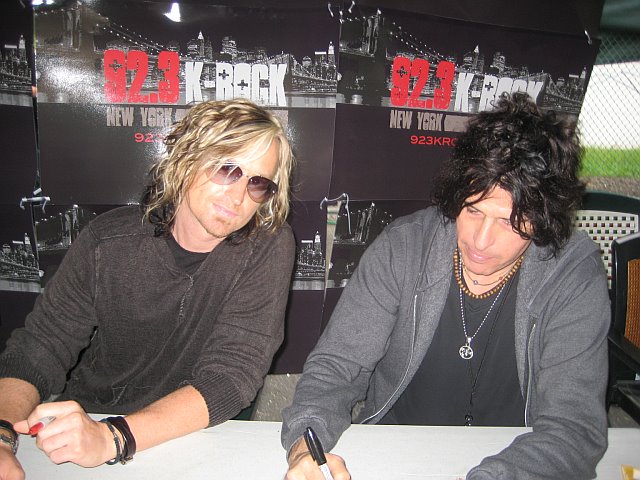 So we get ushered backstage like cattle.. all single file.. with an official head count and everything.. feeling a little silly the whole time but still excited and grateful we got thrown into the mix.. Hey Eric and Dean.. say cheese..

This is Robert.. I was not sitting on his lap.. I swear! He was very nice.. a total gentleman. 🙂 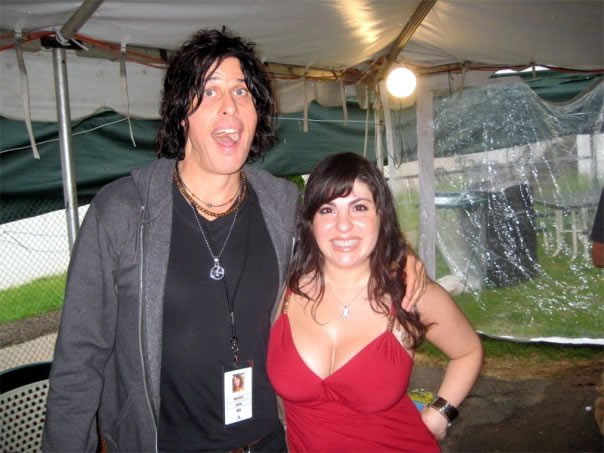 Hi Dean, it’s nice to meet you, I’m Toni. 😉 I am charming the pants off of these guys.. things are going well.. we are all making small talk.. I’m gearing to go.. but wait umm someone is missing.. Where’s Scott?? What? He didn’t show up for my special meet and greet?? I know he is my #1 fan.. what is his problem? Fine I will greet my other fans.. wheres the sharpee? at least Dean appreciates me..

So that’s it.. down the procession.. it’s over.. sigh in all of 10 minutes.. all that anticipation and weeks of running on the treadmill and I got stood up.. well hey, at least my body looks pretty good.. and I did meet the rest of the band which is a treat in itself…

So whats next? The show.. what do you mean we don’t have floor seats? :-(.. So now we are watching Filter from our seats.. see that guard.. she’s not looking.. Go! Go! Go! Go! Go!.. front row! sweet deal.. now ofcourse I lost rosie a few rows back.. but she made it onto the floor too so we are ok! Now if only this show would start!

After keeping the crowd waiting for a full 90 minutes, which nearly insighted a riot.. the band finally hit the stage!  This is them doing Down! Immediately Scott takes off his shirt.. hmm I guess he’s trying to make up for leaving me high and dry earlier.. hmm I’ll think about it.. flowers would be nice.. ok ok I forgive you! 😉 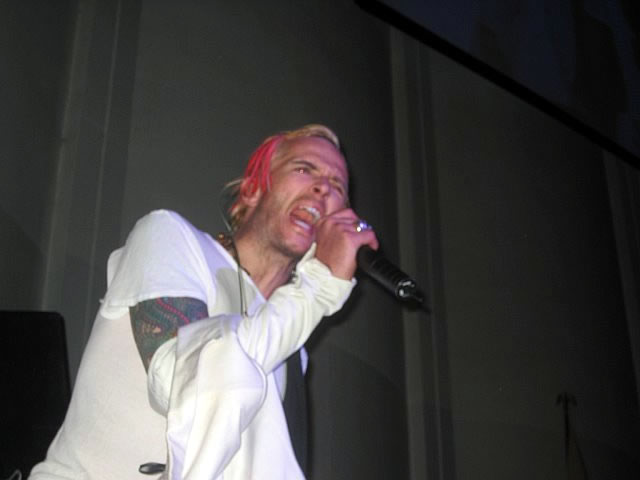 Now we have all heard the rumors.. of what Scott was doing backstage and why he was late for the show.. Another woman? Not your wife? but yet, not me.. I don’t understand? drugs and yelling.. Robert calling someone the C word.. it’s all too much.. All I wanna know is who was responsible for that God awful choice of hair color.. blonde and Pink?? c’mon baby.. you know I like you red..

Interstate love song –  Scott sounding beautiful as usual.. he even got all the lyrics right..and he’s doing that little dance with his feet.. Oh Hi Dean!, I told you I would get upfront somehow.. now pull me onstage!!

Skins versus shirts who will win??

I love you too! Thanks for announcing it.. awe I’m starting to blush.. 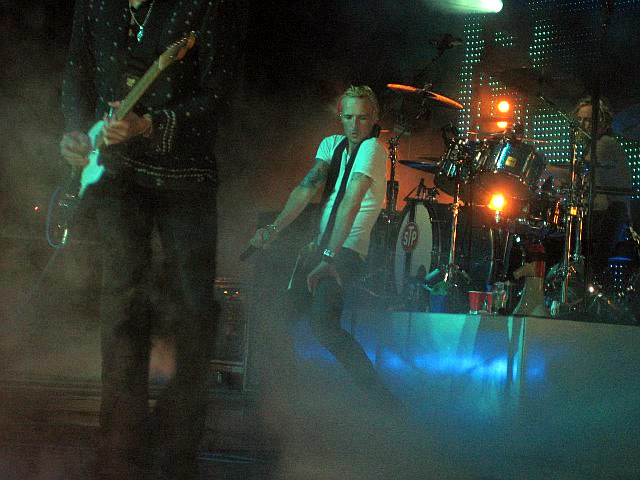 Now don’t you think this photo should be published? I’m damn good even with my lil Canon Powershot.. 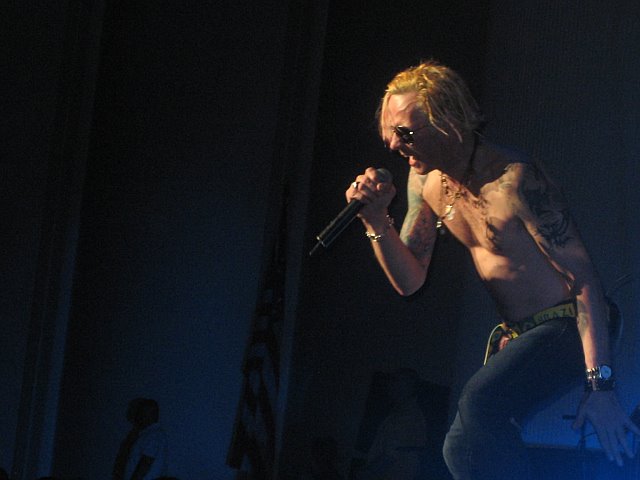 SIN – shake it Scott Shake it!! He actually belly dances quite well! Annoying girl screaming her head off next to me ack! 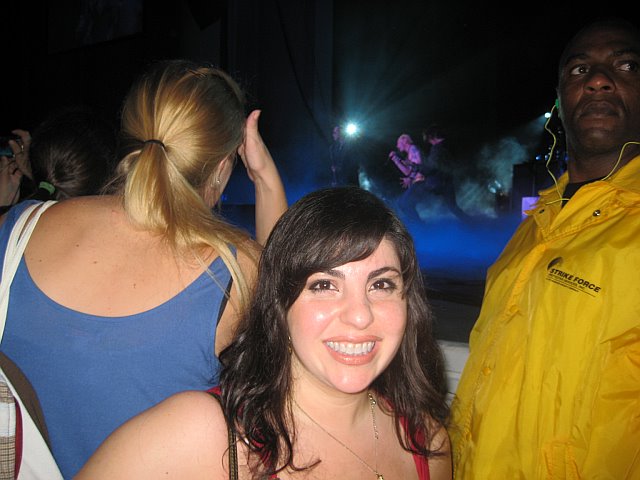 That Guard was the Sh*t! He was perfectly Zen the whole time.. 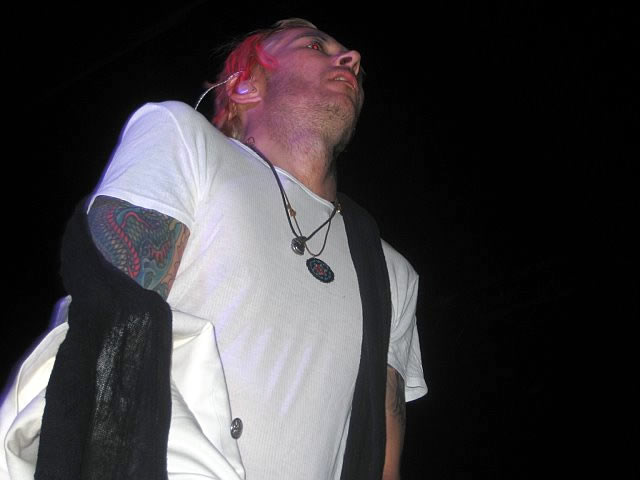 Considering Scott appeared to be on something.. incoherent and quite sluggish when the show first started.. He pulled it together and they were able to put on a decent show. I hope he gets off the smack soon.. your always in my prayers.. until next time.. kisses, Toni 🙂