Jon Bon Jovi & Friends: The Show Must Go On!

Really? Jon Bon Jovi, Really?  Are you seriously not gonna cancel this show? or at least postpone it? But, haven’t you seen my car? Has anyone seen my car? Gah! The weather situation was totally stressing me out, I felt kinda sick & achy from all the shoveling I’ve endured.. and well.. transportation was an issue to say the least… sigh. :-/

So, I managed to get a ride to my sister’s house who happens to live in Sayerville.. which is the boyhood home of Jon Bon Jovi himself and conveniently, the location of the venue (Starland Ballroom). As most of you know, seeing JBJ is always a family affair for me. I almost always go with my sisters. Tonight was no different except it was only 2 of us this time, Me and Diane. 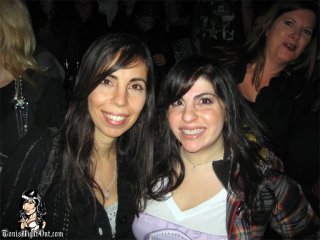 So, off we went.. And as we got inside and started to warm up, I began to get my Mojo back.. after all… I had entered “Joviland” (a magical place where Jovi fans can roam free un-scrutinized). Of course, we were late.. missed 3 songs.. grr stoopid snow! So we B-lined it for the stage.. or at least we tried to. Excuse me… pardon me. I can’t see anything over these people’s heads.. c’mon Mr. 6’2″ heavy-set man… can’t I just stand in front of you for a bit? No? But dude, I’m not going to obstruct your view. I’m like up to your hip.. whateverrrr. These Bon Jovi fans are having none of it! It seems I have no magical powers here at all.. & that, Gasp,  my charm was not being appreciated one bit. They would seriously cut a bitch if they had to. At one point, Diane managed to get herself pretty close to the stage.. only to be pulled back 4 rows by her shirt collar. Ooof tough crowd.

It turns out that some of them had paid up to $1000 per ticket! And traveled from as far away as Hong Kong and Germany to see this show. Although, the cost of that ticket did include a meet and greet / photo opp with Jon.. it sounds pricey to me! So I don’t really blame them. And here I am whining about a little snow, when I live a mere 30 minutes away. Wow that’s dedication…. but still.. I can’t see a thing and this is no fun! :-(. I did however manage to get this clip of him singing “A Whole Lot of Lonely”.. Can you hear those women arguing in the background? That is not me.. as we’ve established in the past, I’m a lover, not a fighter. Lucky I didn’t get my ass kicked. Ahh only a true creative will suffer for her art.  Aww and listen to how lonely he is up there… it’s tragic. 😛

4 Comments to
“Jon Bon Jovi & Friends: The Show Must Go On!”